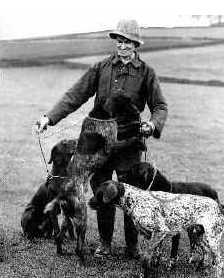 The Bessalone affix is held by Susan Knowles and her daughter Sally. Susan bought her first GSP, a bitch called ‘Silver Archer’ in 1979. Silver Archer was sired by Sh Ch Isara Kurzhaar Archer, of the famous and original ‘A’ litter bred by Mrs Fio Roberts.

Susan’s second dog was purchased from Des and Daisy Hodgkinson of the Stormridge Kennel. Stormridge Hurricane (Cane) was the first born puppy in the first litter to be sired by the great Ch and Ft Ch Geramer’s Sea Venom (Blue – 24 CC’s and 22 Field Trial Awards). This mating took place before Blue even gained his first title.

The quality of the smallest and apparently weakest bitch in the litter was spotted by Des and Daisy Hodgkinson of the Stormridge Kennels who took her on in exchange for a dog puppy – Stormridge Oak.

David believes that occasionally, descendants of Isara Kurzhaar Archer are blessed, or perhaps cursed with exceptional intelligence. Stone was such a dog. (Ask Susan for the stories!)

Susan showed Cane and Oak and occasionally Stone for a number of years with some success at Champ Show Level, and a great deal of success at Open Shows. Champ Shows at this time were dominated by two great dogs; Ch & FT Ch Geramer’s Sea Venom and Sh Ch Galahad of Booton.

Stormridge Snowstorm was the next dog to join the household. At Championship Shows Snowstorm was overshadowed by his brother, Sh Ch Stormridge Midnight, but he was a fantastic ambassador for the breed at Open Shows, where he won countless BOB’s. Few people will know that he was also a fine working dog with a soft mouth and was a staunch pointer.

In early 1987 Susan and David helped to rescue 4 puppies from a locally bred litter. One of these puppies was a rather reluctant eater and so they kept it back. The dog decided he belonged to David and became Bessalone Little Ben. If you ever meet David you may ‘call’ his wife, you may ‘call’ his children, but unless you want to spend an eternity at the bottom of the river Clyde don’t ever ‘call’ Ben!

‘Dog of a Lifetime’

Ben was a reluctant retriever, but had a truly exceptional nose. David’s most valued possession was a letter from a Gamekeeper in Derbyshire, written to Ben, thanking him for saving his job. The shoot, which should have produced bags of 80-100 birds had produced bags of 10, 42 and 33, when one of the guns asked David to bring Ben. The first drive produced 36 birds and every single one was shot off Ben’s points. That day produced 210 birds, a record for the shoot. Every Saturday thereafter produced over 100 birds, until the end of the season. The letter was buried with Ben.

David believes that Ben was his ‘dog of a lifetime’ and none can ever replace him.

Dempsey has won 5 CC’s and 5 RCC’s. He has sired 8 Show Champions and numerous other winning dogs. (See Studs.) Few people appreciate that Dempsey is also a genuine working dog, learning his trade at the shoulder of Bessalone Little Ben. Since moving to Scotland Dempsey has worked the Grouse Moors of Coulter Hills and the Tinto Hill. At 11 years old Dempsey still enjoyed an occasional show and definitely enjoyed his stud dog duties which he tackled with great enthusiasm. Dempsey’s Sh Ch offspring include Sh Ch Wadas Primrose of Washakie, Sh Ch Rodale Ranger and the BIS winning dog Sh Ch Isara Kurzhaar Wooster for Merganser.

Sadly one of Dempsey’s puppies, Rodale Rumbarba, (Conti) died in a tragic accident on the hills at just 3 years old. He had already been awarded his first CC by Fio Roberts. He was a lovely dog to own and is sadly missed.