Seth is the Goof ball of the group, no matter what he can and will make you laugh. Seth is such a happy go lucky dog. He is devoted totally to his humans with love and his waggy tail. Seth recently gained his stud book number via winning Limit at Border Counties Championship show, he also won the Reserve Challenge Certificate under breed Specialist Mrs Sue Harris.

Mr Seth (Wilholme Had a Lovely Time with Bessalone) went and won an awesome Limit Class (gaining his stud book number) plus as an added bonus the Reserve Dog Challenge Certificate!!! Thank you breed specialist Mrs Sue Harris for thinking so highly of our boy! 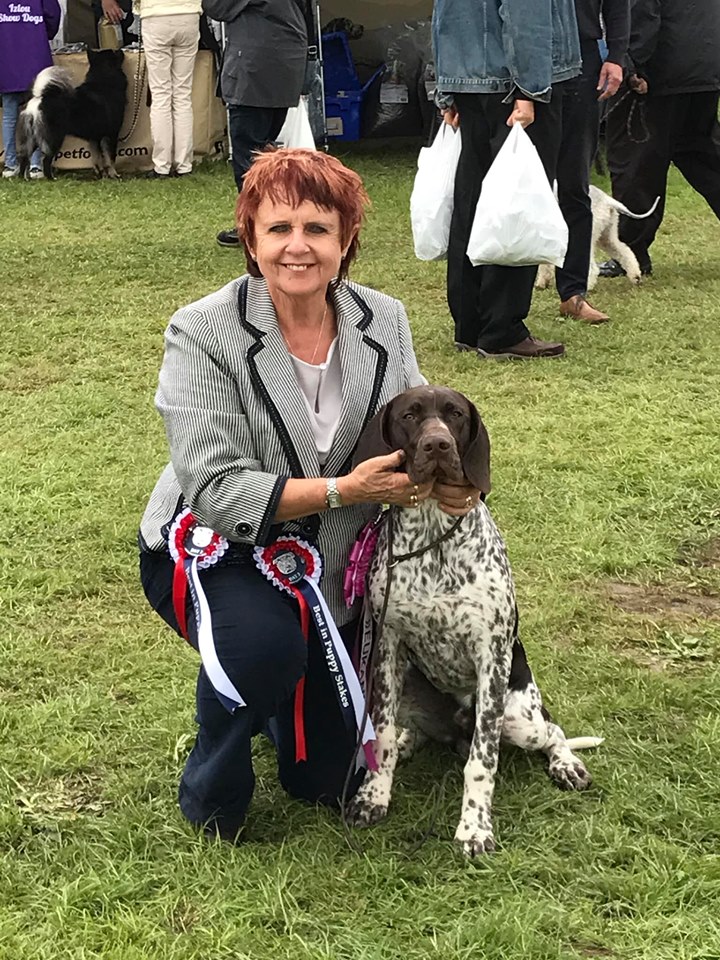 At Cloghran Show Seth (Wilholme Had a Lovely Time with Bessalone) in first winning Open Dog, The Green Star (his second!!!) and then he went on to win Best of Breed! 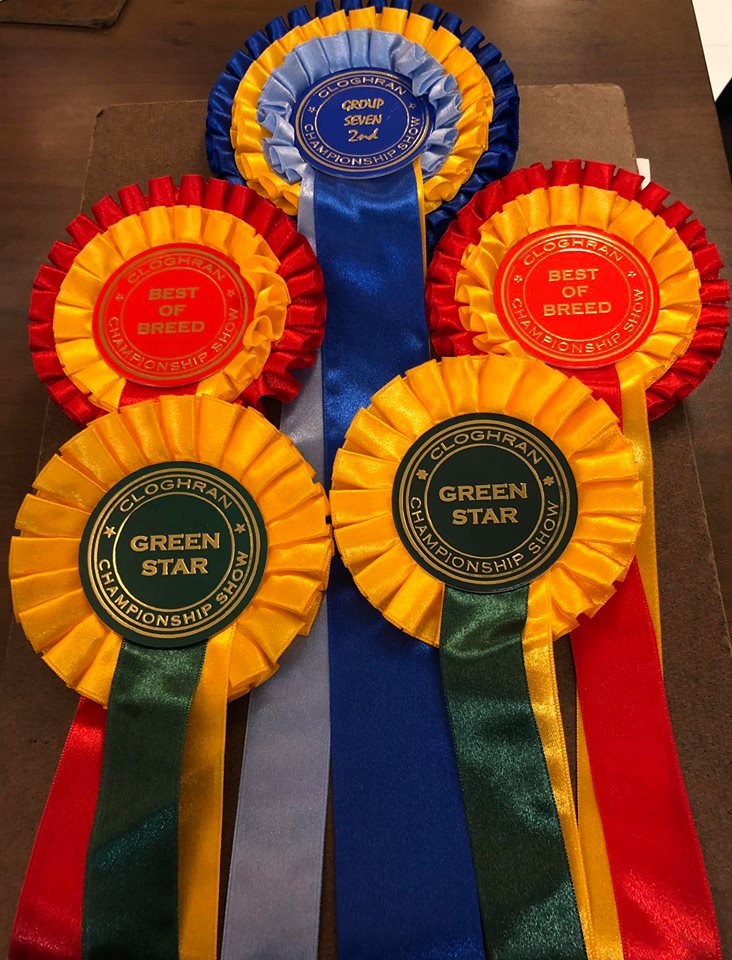 Thanks Jayne Sam Taevas Roden for this great shot of Irene with Wilholme Had A Lovely Time with Bessalone on his way to BOB in GSP’s.at Cloghran Show

It’s been a busy week for Team Bessalone/Wilholme! Especially for Seth. Last weekend was Darlington Championship show and it was all on the shoulders of Mummy Irene who piloted Seth (Wilholme Had a Lovely Time with Bessalone) to a fantastic win in Yearling Dog under Gundog Specialist Mr Frank Whyte He then went on to gain a fabulous 3rd in the Yearling Dog Stakes (being the top Gundog in the class!) (Yay!!!) thank you to judge Mrs M Harding for thinking so highly of our Seth!
Then this weekend it was Driffield Championship Show and the turn of Mr David to try his hand at showing Seth (Wilholme Had a Lovely time with Bessalone) and neither disappointed with Seth winning Post Graduate Dog under another Gundog Specialist Miss Seonaid McAndrew! (Yay!) and then the pair gained another awesome third in the Yearling Dog Stakes under Judge Mrs Penny Williams. Thank you so much to all the judges over the past two weekends! 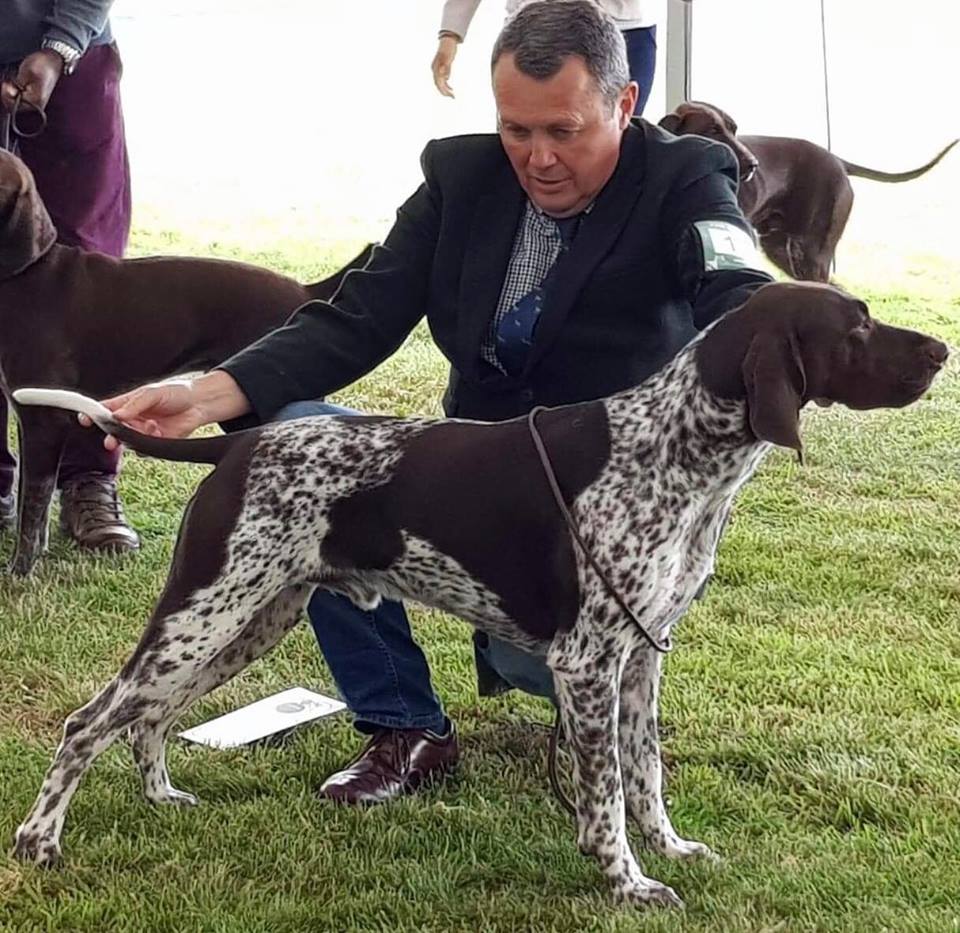 So Team Bessalone/Wilholme had a day out at Three Counties Championship Show Where Seth (Wilholme had a lovely time with Bessalone) was placed in his breed class again and then after a snooze when on and won a fabulous Special Junior Stakes Class! Thank you to both his breed judge Miss H Rose and stakes Judge Mrs C Coode 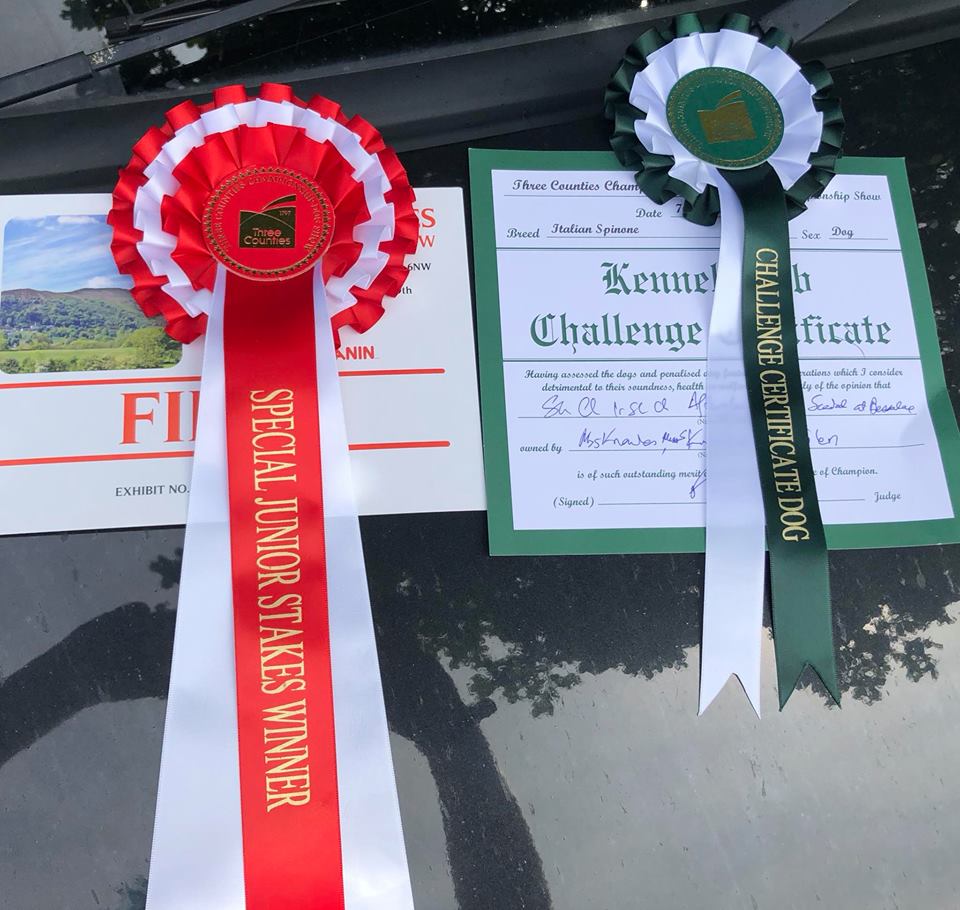 Seth (Wilholme had a lovely time with Bessalone) and Ireneachieved a fantastic second in a strong junior dog at Southern Countes.

So last weekend was a busy one! Three shows in two days

😂
First off we were all at Bath Championship show in which the “kids” did us proud with Seth (Wilholme had a lovely time with Bessalone) coming a respectable second in junior and his best mate Rosie (Bessalone Going Straight) winning a fantastic Junior class!
Then the next day we had North Riding Gundog Club Open Show and North of England Hunt, Point Retrieve Club Sub Group Open Show.
In which Miss Aggi (Wilholme Agnes Brown) strutted her stuff to a lovely second just like her brother Seth.
Seth (Wilholme had a lovely time with Bessalone) also won that day Reserve Best Dog and the AV Junior Stakes!
And not to be out done by her children Princess Pru (Wilholme Sharp n Smart at Bessalone) went and won Best of Breed!
Then it was Siddly Diddly’s (Sh Ch. Irish Sh Ch. Afterglow Hashtag Scandal at Bessalone JW. Sh CM. CW16) went and won Best of Breed at both shows but on top of all that he also Stormed his way to BEST IN SHOW! at BOTH of the shows! I’d like to thank all of the judges that day for thinking so highly of our brigade So today was Gundog Breeds Assoc Scotland’s Top Dog Competition
First up for us was the puppy competition in which Mr Seth (Wilholme Had a Lovely Time With Bessalone) handled by his Momma Irene when got right through until the final round! Then he only went and got placed 3rd Top Puppy! Thank you to Judge Mr C Atkinson for thinking so highly of our duo 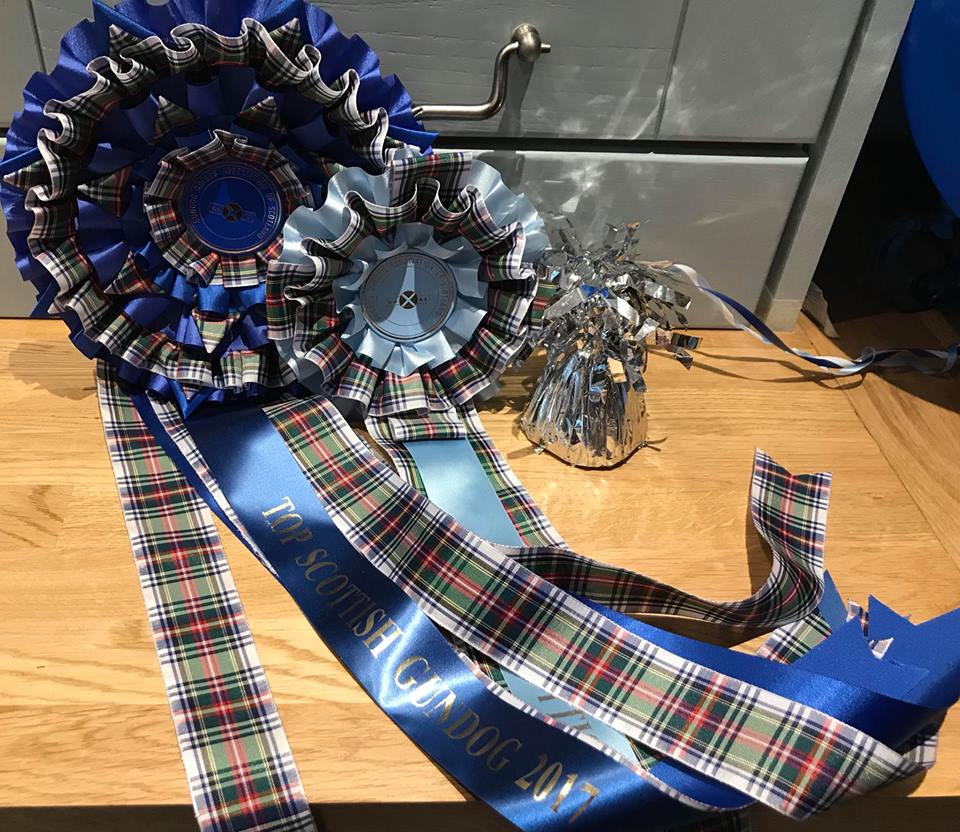 Yay! Seth (Wilholme Had a Lovely Time With Bessalone) gets to go and play at GBAS top Puppy competition with his “uncle” Siddly (Sh Ch. Irsh Sh Ch Afterglow Hashtag Scandal at Bessalone JW. Sh CM. CW16) who is competing in the Adult competition 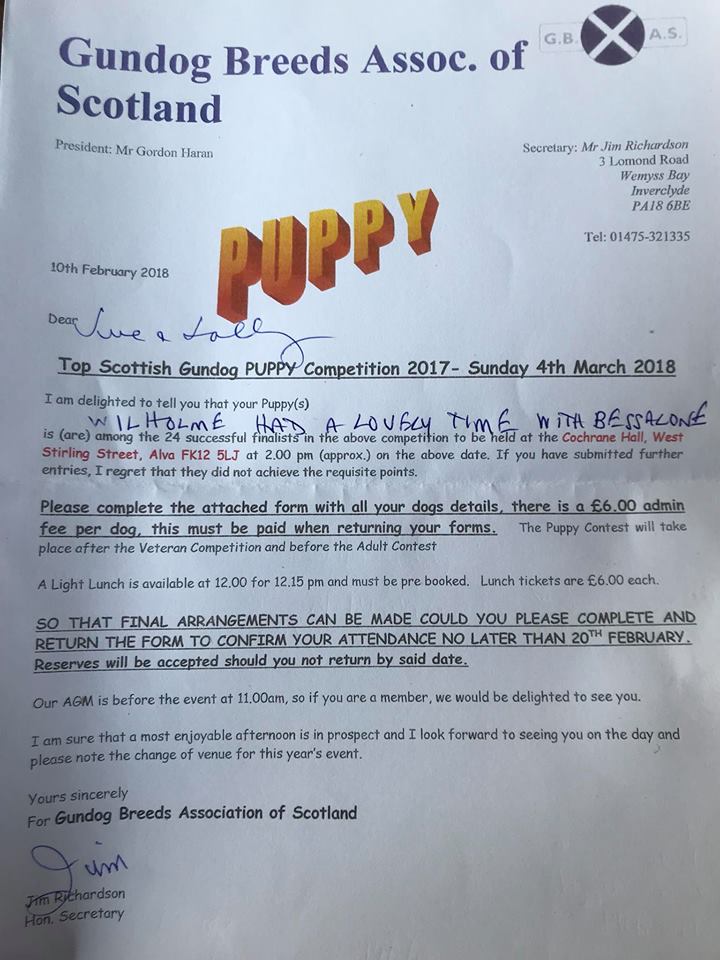 As always a fun day at the Irish Gundog Field & Show Society. Great to catch up with friends & always a good laugh ! Star of the day was Wilholme Had A Lovely Time with Bessalone who had some good results in the Breed but also won the Puppy Stakes. Thanks to Chris Hancock & Orlagh Murrayand the rest of their team for a well run show. At All Bull Breeds Champ Show Seth was Reserve Green Star.

Super busy weekend with HPR of Scotland on the Saturday where we had the excellent expert at handler Stephanie Jackman to help us! (Mega Thank You! Steph!) Steph handled Seth ( Wilholme Had A Lovely Time with Bessalone) to a brilliant 2nd in the Gsp puppy class under breed specialist Megab Hayes and then to a fantastic 1st HPR AV Puppy Stakes!  under Donna Kirkwood-Emery.

Then today (Sunday) it was Seth flying solo at the GSPC open show. In which his training buddy Barbar Allison handled Seth to 1st in Minor Puppy Dog, 1st in Puppy Dog and Best Puppy Dog under Gundog Specialist Mr David Alcorn.
He then went on to 3rd in the Special Fred Whitwhorth memorial Stakes Junior Class  under Mrs Janet Kirkwood. 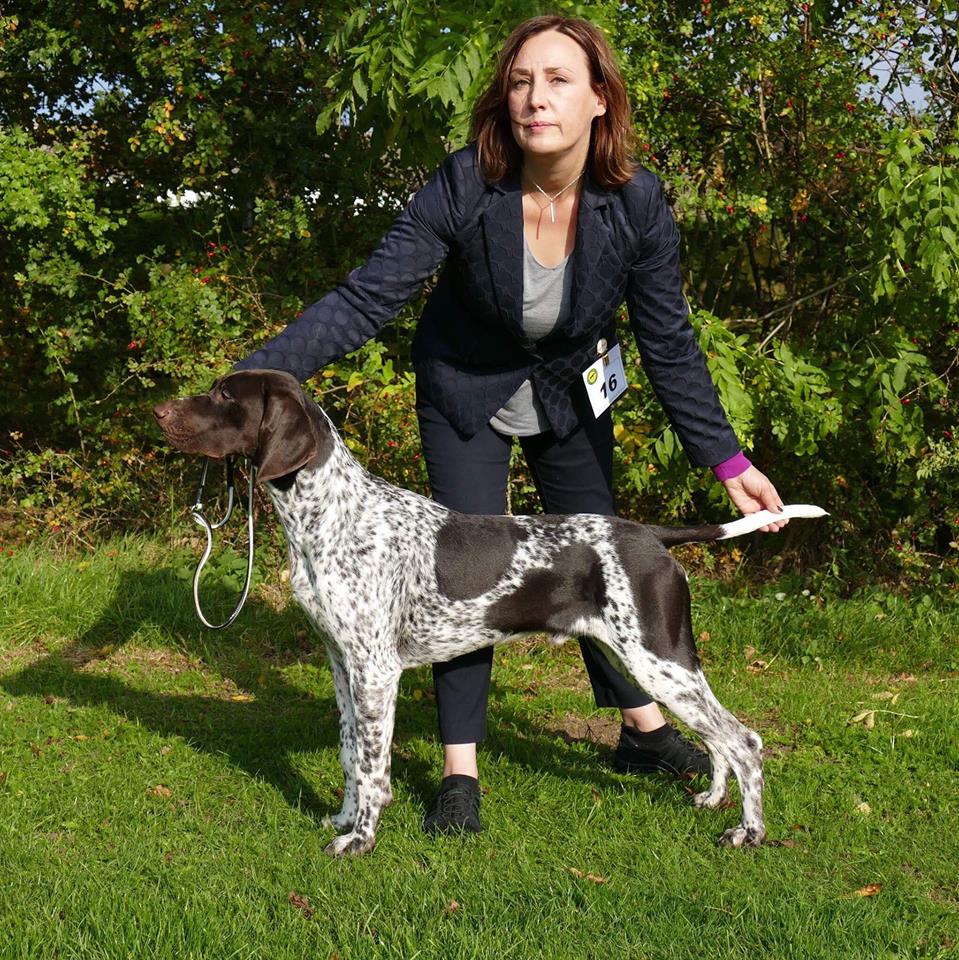 At Nidderdale Show Seth was 3rd in the breed under Judge Gerald Philpot from Ireland.

At Carlow Seth (Wilholme Had a Lovely Time with Bessalone) went and won puppy dog, The  reserve green star and 3rd in the puppy stakes!.

Seth was 3rd in Puppy Dog at Richmond Show and then won the Puppy Dog Stakes and then  the heat of the day- clever boy !!! 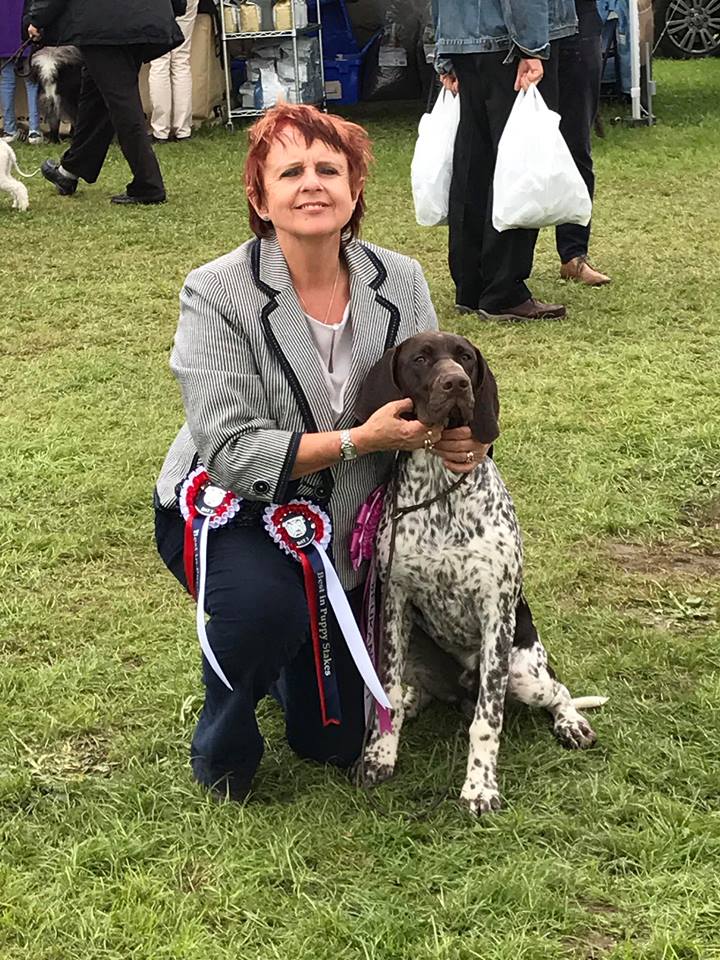 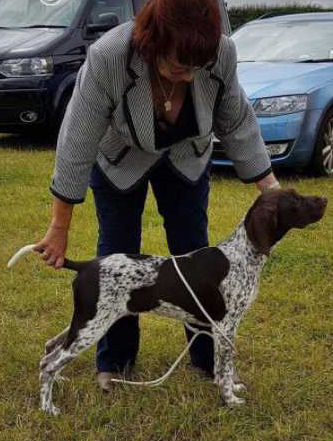 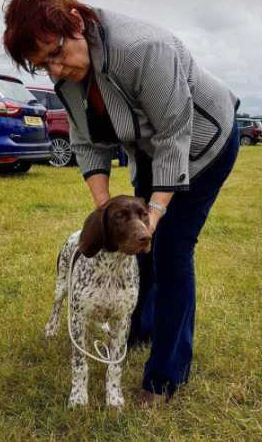 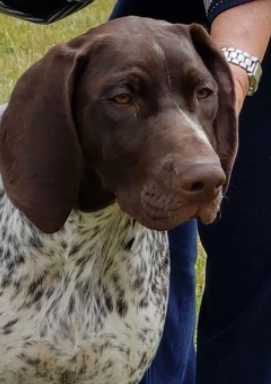 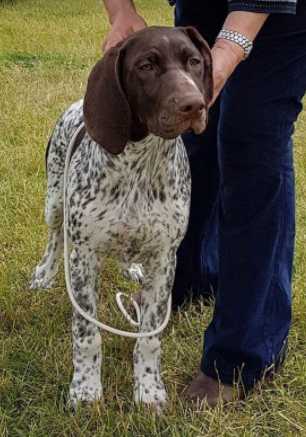 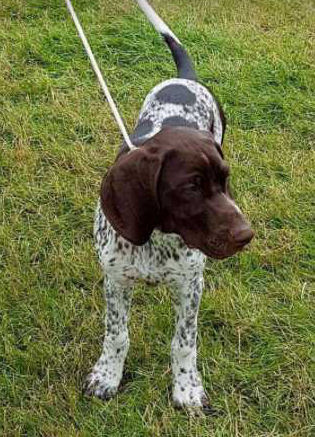